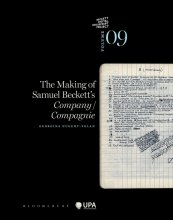 The latest BDMP volume discusses Samuel Beckett’s late prose text Company/Compagnie. Company was first composed in English between the years 1977 and 1979, with Beckett breaking a 20-year-long pattern of composing primarily in French to craft this meticulously structured 59-paragraph masterpiece of his late prose. Its French companion, Compagnie, was translated in only two weeks, in August 1979, yet the French came into print in early 1980, some months before the English ‘original’. Both texts emerged during a period of intense theatre work for Beckett, and the composition of Company in particular appeared to offer Beckett a degree of respite from his theatre commitments, with the text at times appearing to take on the role of a companion, not unlike the relationship between the hearer and voice depicted therein. Company sees Beckett adopt and abide by a rigorous predetermined plan laid out across four schemata, a plan that encompassed the entire text on a paragraph-by-paragraph level. This distinguishes it from Beckett’s approach towards the composition of texts such as Molloy or Malone meurt. The genetic critical analysis of the manuscripts of Company/Compagnie takes this schema-dependent compositional method as its core focus. It forwards a new hypothesis regarding the genetic map of both works, and considers the relationship between this uniquely entwined ‘original’ and ‘translation’.